Previous Next
Is Coolsculpting Safe?

As the demand for noninvasive fat removal continues to rise, Coolsculpting is increasingly becoming popular in America and worldwide. The latest reports indicate that over 4 million people around the world have this procedure every year. One reason for its popularity is the fact that the American FDA has approved it. Hundreds of successful clinical trials have also supported it.

However, many debates are still going on regarding the safety of Coolsculpting, with some experts arguing that the procedure leaves vital nerves numb for weeks, if not months, which can lead to many other complications. Others claim that since this is a noninvasive procedure, the risks are comparatively low. The only way you will surely know if Coolsculpting is safe for you is to understand what it is and how it works. 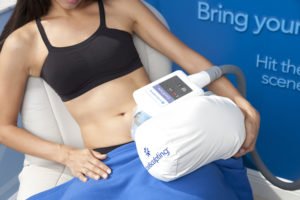 Coolsculpting, also known as cryolipolysis, is a cosmetic procedure that involves cold temperatures to eliminate fat cells without causing frostbite. This procedure is based on the fact that it is possible to destroy fat tissue by freezing it at considerably low temperatures without harming the overlying skin, blood vessels, muscle tissue, and nerves. It is ideal for body parts with stubborn fat like the tummy, upper arms, thighs, buttocks, chin, cheeks, and neck.

How Does It Work?

Coolsculpting doesn’t involve surgery or needles. It uses a cryolipolysis device called the applicator. This device holds the area your doctor wants to work on between two cold paddles. Your doctor will leave the paddles on for about one hour. This allows the cooling process to destroy at least 20 percent of fat cells in the targeted area. Your system will clear out the dead fat cells over time. Although this procedure’s results are not instant, they should start to show within a few weeks.

The most common side effects of Coolsculpting include redness, tenderness, tingling, numbing, and bruising of the surrounding skin. Other potential problems might consist of pain in the targeted areas, an abrupt change to the skin and underlying fat layers, skin ulcerations, Paradoxical Adipose Hyperplasia (PAH), and scarring.

The good news is that most of these side effects are temporary. The most frightening complication is PAH because it can lead to a gradual extension of your body’s targeted areas. But it is not fatal. Talk to your doctor about any other potential risk of Coolsculpting before undergoing the procedure.